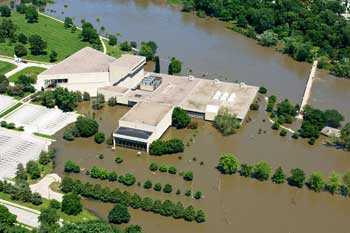 “Our community was torn asunder.” David Gier, Director of the University of Iowa’s School of Music, says of the 2008 flood that forced the School from its longtime home in the Voxman Music Building. Having survived the 1993 flood, dubbed a “100-year flood” by the Army Corp of Engineers, many in the School of Music took the threat of another flood seriously but also assumed they had surely seen the worst. Who expects a “1,000-year flood”? But it was worse – much – and the catastrophe that started when the Iowa River crested in June 2008 continues to unfold even now. Not unlike the current of the Iowa River, the event and its aftermath has ebbed and flowed with both losses and unexpected benefits.

During the 2007-08 winter, heavier than normal snowpack followed by frequent and intense rainfall in May and June caused the Iowa River to swell. By early June, officials were eyeing a flood to rival the one the UI’s arts campus had weathered more than a decade earlier. “I received a call from the University’s Facilities Management team asking to tour the basements of both Voxman Music Building and Theatre Arts, remembers Kayt Conrad, Director of Operations for the Performing Arts, noting that both basements had flooded in ‘93. “They told us, ‘You need to make a plan to remove this stuff. Soon.’”

On June 9, Conrad sent an email to arts campus faculty, staff and students telling them that the UI’s Critical Incident Management Team was closing operations on the arts campus. Everyone needed to leave. “I was attending daily meetings,” she recalls, “with updates on the weather forecast, the status of the Coralville Reservoir, prognoses for various areas of campus, and what we were doing from a communications and PR stand point.”

Several decisions happened at once. First, the UI’s annual music camp students needed to leave Iowa City while roads in and out of town were still passable. All week, the students attending the annual camp had been meeting at West High, rather than Voxman as a result of the rising river. When an announcement came that the only bridge across the river that was still open – Burlington Street – was also likely to close officials feared that campers would be separated from their personal belongings in the dorm.  Parents were called, and even then some families had a difficult time getting to Iowa City, with trips taking as  much as four hours longer than under normal circumstances.

By June 12, it was clear that moving things up on to cinder blocks was not enough.  Everything on the main floor of the 200,000 square-foot Voxman building needed to be moved to the second floor. Much of the faculty was out of town for the academic interim, most with summer playing commitments elsewhere. Conrad and Mark Weiger, the acting director for the summer, rallied those still in Iowa City along with UI football players, band camp counselors, family members, and local music lovers for an all-day moving effort. They worked for more than twelve hours, hauling the entire contents of the band, orchestra, and choral libraries upstairs, along with the extensive percussion studio (which includes marimbas, congas, timpani, and countless handheld instruments), computers, filing cabinets, and paintings. “There were students hoisting file drawers that probably weighed nearly as much as they did,” recalls Kristin Thelander, who flew back that day.

The second floor became stuffed with double its usual contents. Tiny practice rooms bulged with instruments and papers.  Office furniture, music stands, and computers were piled on top of each other in the hallways. “We tried to maintain some order,” says then director Kristin Thelander, “but at some point, it simply came down to time.” She recalls stacks of paper and books that looked as though they were ready for a bonfire.

When the building was locked that evening after sunset, everyone believed they’d be able to come back in the morning and finish up. But the river was ahead of them. When they arrived a little after sunrise on Friday, June 13, the doors had been chained closed. “When we saw that, everyone felt like they’d been kicked in the stomach,” recalls Steve Carver, then the lead piano technician. “It was just such a helpless feeling. One guy arrived hoping to collect some valuable scores and tried and tried to open the door, shaking it and arguing with the people from physical plant. It was wrenching to watch.”

For many, the next few days were the worst. Except for the main administrative staff that had decamped to Halsey Hall, an old gymnasium across campus, others were now without an office. They waited out the days at home wondering if their efforts would be sufficient. The river churned angrily. And almost impossibly, it continued to rain.

A few weeks later, a small group returned to the building to remove personal belongings left behind, especially from students’ lockers, and to survey the remaining pianos, as well as the organs. There was no electricity in the building, save for the daylight coming in from the windows and the narrow beams of flashlights.

“It was dark. It stunk, a really nauseating smell,” recalls Conrad. “The floors were slick so that when you tried to move something, especially something like a piano, it was easy to slip.”  At the end of the visit, someone commented that in 1993 they’d been out of the building for several months. Conrad looked around at the total ruin and replied, “We’re never going back in this building.”

She turned out to be right. But it would take a long time to be certain.