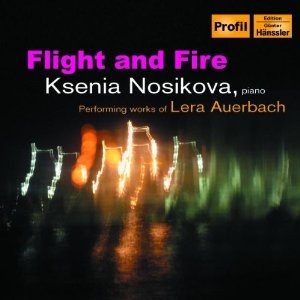 The Russian pianist and composer Lera Auerbach was born in 1973. Her music is powerfully communicative and, although concentrated in its organization, has the ability to transport the listener. Music is life. Life is music. The composer herself is fascinating; someone who writes music bursting with vitality and color - generous in its impact - yet is reluctant to speak about it. However, in her attempt to not disclose too much, Lera Auerbach is actually very forthcoming.

"I am afraid I would not be able to help with the interview. When I was younger I enjoyed writing program notes for my music: I felt it was a way for me to protect it from possible misunderstanding; one last service that a composer could do for his child before it is fully on its own. I no longer like writing about my music. Even being interviewed about it becomes an inner-burden. What I realized is that you can't protect your child and should just let it be without any attempts to explain or defend it. Sometimes letting go is the hardest thing to do. The music is out there on its own whether you like it or not; it's no longer under your control, and frankly, it never was. Revealing the chord that still ties you, as a composer, to your work only does your music disservice. "

"Let music connect directly to the listener regardless of the composer's own attempts to interpret its essence. Jorge Luis Borges wrote, 'A man sets himself in the task of portraying the world. Over the years he fills a given surface with images of provinces and kingdoms, mountains, bays, ships, islands, fish, rooms, instruments, heavenly bodies, horses, and people. Shortly before he dies he discovers that this patient labyrinth of lines is a drawing of his own face'."
From Booklet's Notes by Colin Anderson

"Entitled, "Flight and Fire", this disc offers a stimulating fare of the piano music of the Russian composer, Lera Aurebach…Nosikova plays with fingers of steel; yet she can turn her tone inwards at a moments' notice, as in the quieter passages of the second movement. The elusive nature of the fourth movement is particularly spellbinding, while the concentration of the final Adagio religioso belies the studio conditions… Fascinating listening. It is hard to imagine a disc that does greater service to Auerbach's piano music." Fanfare Magazine, Colin Clarke, February 2008

"The really first-rate pianist Ksenia Nosikova enters into a competition with Lera Auerbach as an interpreter…It is not by chance that the composer dedicated the first sonata to her. From the "Fantasia" of the year 1986 to the "Il Segno" of 2006, the interpreter crafts a focused insight into the piano creations of 1973-born Auerbach. She clearly exemplifies the game with old forms of Russian precursors (like toccata or sonata) by cutting to the character. She elucidates the contrasts of introspect and "barbaro" expressions with large dynamic broadness." Fono Forum (Germany), Michael Stenger, October 2007