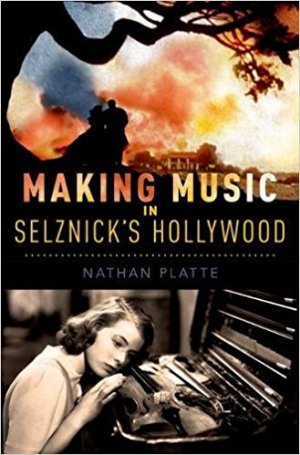 Through the rise and fall of the Hollywood studio system, David O. Selznick reigned as Hollywood's preeminent producer. His reputation depended in large part on music. The orchestral cacophony of King Kong, the pulsing electronic sonorities of Spellbound, and the Tara theme from Gone with the Wind made music a distinguishing feature of the Selznick experience. By flaunting music's role in film and overseeing its distribution through sheet music, concerts, radio broadcasts, and soundtrack albums, Selznick cultivated a fascination with film scores. But he did not do it alone.

In Making Music in Selznick's Hollywood, Nathan Platte brings to light the men and women whose work sounds throughout Selznick's many films. The cast includes familiar composers like Max Steiner, Franz Waxman, and Dimitri Tiomkin, but extends to overlooked contributors, including music editor Audray Granville, orchestrator Hugo Friedhofer, harpist Louise Klos, choral director Jester Hairston, publicist Ted Wick, and many others. Novelists, studio writers, and directors like Alfred Hitchcock also influenced the soundscapes of Selznick's films. Whether working with the producer directly or managing his presence from a distance, all had to reckon with Selznick's musical preoccupations.

Rarely was it easy. Rewritten scores, fired personnel, and other skirmishes reflect the troubles-and uneven compromises-that shaped music for films like Gone with the Wind, Duel in the Sun, and Rebecca. Even Selznick anticipated that such problems would "go down in the history of Hollywood as the last wild fling of people who really fiddled-and how!-while Hollywood burned." Drawing on extensive archival research, Platte recounts those stories here, tracing Selznick's musical labors during the silent era through his work at the major studios and his culminating efforts at Selznick International Pictures. Taken together, Selznick's films provide a sweeping vista of the relationships among musicians and filmmakers that defined the Hollywood sound.