Music for Piano and Chamber Orchestra 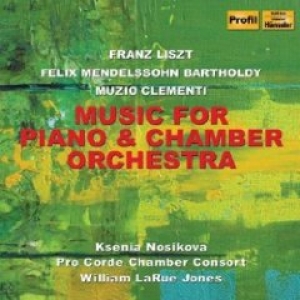 This disc presents an interesting collection of three relatively unfamiliar piano concertos: Liszt's phantasmogorical and brilliant Malèdiction for Piano and Strings composed in 1833, when Liszt was 22 years old and in the midst of his virtuoso career; Concerto in A minor by Mendelssohn, writen by 13-years-old Mendelssohn in 1822, a juvenile work but testamental of the composer's childhood genius; and the delightful Clementi's Piano Concerto in C major, which was written in the 1780's and survived only in a copy made in 1796 with altered instrumentation by a third party.

"The Malèdiction is excellent and one of the best recordings ever made of this piece; the performance succeeds in maintaining a dramatic argument for the whole 15 minute movement with admirable cooperation between the soloist and accompaniment, rather than a piece that maintains only for certain sections, as is common to recordings of the work", All Music Guide, April 2010

"A collector would be hard pressed to obtain a tripling of more convincing performances of such rarities on one CD, and all played with a twinkle in the eye, a simultaneously wistly penetration (especially the Mendelssohn), and a self-effacing validity that carries these musical "Footnotes" into the realm of the absolutely listenable- and perhaps memorable, as well". Amazon.com, Melvyn M. Sobel, April, 2010