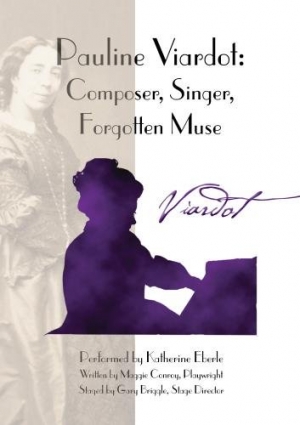 Pauline Viardot (1821-1910) was not only a renowned French singer and composer, but remarkable because she stood at the center of a circle of eminent European artists, and influenced the work of men and women like George Sand, Chopin, Liszt, Saint Saens, and especially Ivan Turgenev. The close association between Viardot and Turgenev served to bridge the cultures of Western Europe and Russia.
This one-woman show portrays Viardot on a day late in her life, when, her husband Louis having recently died, she is sorting out the affairs of the dying Turgenev. In conversation with a visitor, she recalls her life, her loves, and her artistic triumphs. Katherine Eberle plays Viardot in a monologue written by playwright Maggie Conroy, interspersed with songs by the composer. Eberle sings and accompanies herself on piano, as she tells of Viardot's impact on the writers and artists of her lifetime.