Home » The Songs of Arthur Honegger and Jacques Leguerney

The Songs of Arthur Honegger and Jacques Leguerney 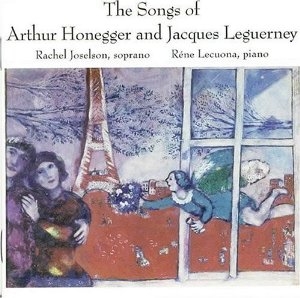 Arthur Honegger, of Swiss parentage, was born in Le Havre, France. At a young age his father sent him to study at the Zurich Conservatory, and at age 21, he moved to Paris where he was accepted into the Paris Conservatory. After the war, he gained wider notoriety for a period of time by his association with Les Six. Honegger was the only one of Les Six who did not wholly support Satie and all of the ideals the group adopted. While he also rejected the over-exaggerated expressions and the absence of form in the compositions of the late Romanticists, Honegger had little sympathy for the rather whimsical and trivial simplicity of the music of some of the members of Les Six. He wrote more than 40 melodies for voice and piano, which appear as 21 groups of songs, containing a total of 56 individual songs that reflect various levels of sophistication. As a body of work, the songs by Honegger demonstrate a broad range of imagination and expression. Jacques Leguerney, born 18 years later than Honegger, also in LeHarve, France, became fascinated with music and its composition after beginning piano lessons and attending concerts while yet a child. However, as the son of a prominent lawyer raised in a typical upper middle class setting, he was expected to undergo the usual classical education and prepare for a profession such as law even though he continued with formal piano lessons.

However, the young Leguerney's interest in music composition was not to be denied. In 1925, after he had begun law studies, he dropped out to take private harmony and counterpoint. At the age of 20, he began study with Nadia Boulanger. This lasted only a year because he resisted her teaching methods as unsuited to his personal goals for composition. He was encouraged by Albert Roussel to continue to compose in his own style. Leguerney's love of French Renaissance poets inspired him to set their poems to music. He was neither a trained singer, nor an accomplished pianist and, despite a minimum of formal musical training, his native talent enabled him to work out the melodies and the precise pianistic sounds that would express the nuances of the poem. The three groups of songs that are included in this album are from Leguerney's collection of his settings of French Renaissance poems that he named Vingt Poemes de la Pleiade.

The title was chosen in accordance with the name Pleidade (the seven stars in the Taurus constellation) used by literary historians for the group of seven poets of the 17th century who called for the purification of the French language. Graham Johnson, a noted British pianist/accompanist, writing in a French Song Companion made this observation: "There is so much character and vitality in this music that its neglect is difficult to explain...This music is too good to remain a rarity. It would certainly repay the championing of a new generation of interpreters, and Leguerney's name deserves to be seen on concert programs as a matter of course."