Home » Songs of the Holocaust

Songs of the Holocaust 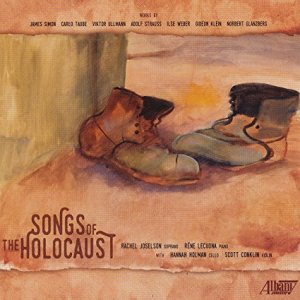 RACHEL JOSELSON AND RÉNE LECUONA PERFORM SONGS OF THE HOLOCAUST -- MOST WRITTEN BY COMPOSERS IMPRISONED AT THERESIENSTADT.

In 1941, the Nazis began deporting Jews to a concentration camp in Theresienstadt (former Czechoslovakia). An unusually high number of artists and musicians were deported there, and the camp was intended to demonstrate to the world, after a visit by the International Red Cross, how well the Jews were being treated by Hitler's regime. The musicians living in Theresienstadt composed hundreds of vocal and instrumental works, as music was their means of coping with the uncertainty and constant fear that marked life in the camp. This recording offers songs written by inmates of Theresienstadt: Adolf Strauss, Viktor Ullman, Carlo Taube, Ilse Weber, Gideon Klein, and James Simon, all of whom perished in the camps. Composer Norbert Glanzberg, a Polish Jew who survived World War II by hiding in unoccupied France until 1944, composed hits for Edith Piaf, Yves Montand, and Maurice Chevalier, before launching a successful film music career after the war. In his later life, inspired by a collection entitled, "Death is a Master of Germany," writings of both Jewish victims and non-Jewish resistance fighters in the camps. Glanzberg went on to compose his "Holocaust Lieder" in memory of those who perished.