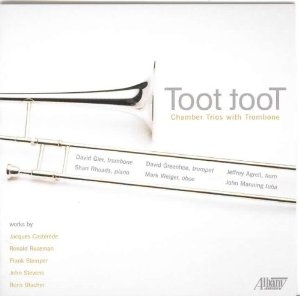 Several currents in modern music have contributed to the present body of chamber music that includes trombone. Without question, jazz trombonists have influenced composers with their persuasive presence and ear-catching explorations of the trombone's technical and expressive capabilities. Other influences include academia, producing exceptional brass players, and the instrument's affinity for theatricality and offbeat sounds have led to the increasing presence of the trombone in the music of our time. Naturally, with the prominence of such players as Stuart Dempster, John Swallow and Christian Lindberg, major composers have been prompted to write with the trombone in mind. Hence, the remarkably diverse and striking works on this CD. David Gier began his professional career as a member of the Springfield, Massachusetts, Symphony Orchestra and with orchestras and ensembles in the northeast. He currently teaches trombone and brass at the University of Iowa and has been an active performer and clinician at various venues and workshops. Gier's students have been prizewinners in numerous solo competitions and have won trombone positions with many professional ensembles. Before moving to Iowa, Gier served for six years on the faculty of the Baylor University School of Music.