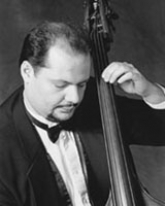 Mr. Orhon has performed with internationally recognized musicians including Gary Karr, Fazil Say, the Emerson String Quartet, and Tokyo String Quartet, and has performed recitals and as a soloist with orchestras around the world. He was one of the performers for the international consortium of Pulitzer Winner composer John Harbison’s Concerto for Bass Viol and Orchestra. He has been invited to perform at the European double bass conferences in Paris, Berlin, Prague, Lucca and Wroclaw. He has given solo recitals and concerts at institutions including the Bursa State Conservatory and Eskisehir Anatolian University (Turkey), Paris Conservatory, Norwegian Academy of Music, Arizona State University, University of Michigan, Butler University, Northwestern University and North Carolina School of the Arts.

An avid chamber musician, Orhon is a frequent guest with the Arizona Friends of Chamber Music, Ouro Branco Festival in Brazil, Roycroft Chamber Music Festival (NY) and the Saint Vincent College Chamber Music Series (PA). He has also performed at prestigious festivals including the Montreux, Saint Denis-Paris, Antibes, Montpellier, Istanbul, and Izmir jazz festivals. As an orchestra musician, he served as principal double bass in the Orchestra Iowa and performed with the Detroit Symphony, Hartford Symphony and Connecticut Opera Orchestras.

Mr. Orhon has recorded CDs under the Albany, Centaur, and Crystal Records labels. Most recently he recently recorded the double bass concerto Bailey’s Beads with the Royal Philharmonic Orchestra in London, a work written for him by composer David Gompper. This recording will be released under the Naxos label in 2020.

As a pedagogue, Mr. Orhon has been an invited clinician to workshops across the United States and abroad, including European double bass conferences Bass2018 LUCCA, Bass Bass2010 Berlin, Bass2008 Paris, Ouro Branco Festival in Brazil, Suzuki Association of the Americas, American String Teachers Association and the International Society of Bassists. He has served on the faculties of the University of Connecticut, Central Connecticut State University, University of Massachusetts Amherst, The Hartt School Community Division of the University of Hartford, Kinhaven Music School (VT) and Summer Strings Music Festival in Pocatello, Idaho.

Born and raised in Turkey, Mr. Orhon began playing the double bass at the age of 12, and spent much of his youth touring Europe with the Mediterranean Youth Soloists. After receiving his bachelor's degree from the Ankara State Conservatory under the tutelage of Tahir Sumer, he became a member of the Ankara Presidential Symphony Orchestra. In 1991, Mr. Orhon came to the United States to continue his studies with Gary Karr at The Hartt School of Music, where he earned an Artist Diploma and Master of Music.

Mr. Orhon is currently professor of double bass at the University of Iowa. He is a D'Addario Diamond Performing Artist.