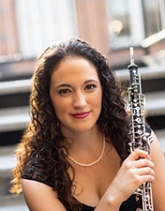 A highly regarded performer and pedagogue, Dr. Miller tours as a soloist, chamber musician, and teacher throughout the United States, Europe, Asia, and South America. An experienced orchestral musician, Miller has performed in many orchestras in the United States including the Chicago Symphony Orchestra Iowa, the Quad City Symphony Orchestra, and Waterloo-Cedar Falls Symphony. Dr. Miller is a core member of the internationally established chamber ensemble, Virtuoso Soloists, and is a founding member of the Voxman Reed Trio with University of Iowa colleagues Benjamin Coelho and Jorge Montilla.

A versatile artist, Dr. Miller is devoted to performing both established repertoire as well as new compositions and lesser-known works. Her 2019 album Portuguese Perspectives introduces a collection of world-premiere recordings for the oboe by Portuguese composers and includes several new commissions by Miller. This album and her 2015 release Modern Fairy Tales are readily available on iTunes, Amazon, and Spotify. American Record Guide praises her “seamless consistency in the various registers of the oboe…and sensitive phrasing and articulation.” Fanfare Magazine hails Courtney Miller as “a performer of considerable skill, with an unfailingly lovely sound, abundant technical ability, and a special gift for turning notes into poetry.”

In addition to collaborations within the field of music, Dr. Miller has a flair for interdisciplinary work. She has collaborated with hip-hop dancer Ernest “EKnock” Phillips; belly-dancer Janelle Issis; and most recently choreographer and dancer Kristin Marrs at the University of Iowa. Since 2016, Marrs and Miller have performed in many concerts featuring oboe and dancer and have toured together throughout the United States. Perhaps her most daring collaboration yet is Psionic, which explores interactive movement data between oboist and computer through a live stream of EEG data with composer Christopher Jette; printmaker Terry Conrad; and digital media designer Daniel Fine.

Dr. Miller has authored scholarly articles about the English horn’s role in the orchestra and Charles Loeffler’s Deux Rhapsodies for oboe, viola and piano published respectively in the Double Reed Journal and the Journal of the American Viola Society. She has also presented recitals and papers at the College Music Society’s Northeast Regional Conference. Dr. Miller performs recitals regularly at the International Double Reed Society’s annual conferences. In 2017 she was a featured artist at the first international conference of the Associação Brasileira de Palhetas Duplas (Brazilian Double Reed Society or ABPD).

Dr. Courtney Miller has a Doctor of Musical Arts from Boston University, a Master of Music from Cleveland Institute of Music, and a Bachelor of Music from Florida State University. Her primary teachers include John Ferrillo, John Mack, and Eric Ohlsson.