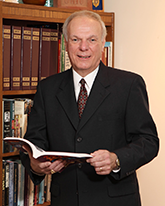 Kenneth H. Phillips is Professor Emeritus at The University of Iowa where he held joint appointments in music and education (1985–2002), and served as Chair of the Executive Committee of the School of Music. He was also founder and former Director of Graduate Music Education at Gordon College (Wenham, Massachusetts).

An accomplished choral musician, Dr. Phillips conducted the Chamber Singers of Iowa City from 1993 to 1999, which at the time was formally affiliated with the School of Music. He also was founding director of the Cedar Rapids Symphony Children’s Chorus, and has served as guest conductor for choral festivals in the US and abroad, and as choral adjudicator. His major choral study was with Vance George, Director Emeritus and four-time Grammy-Award winner of the San Francisco Symphony Chorus.

Recipient of five outstanding teaching awards from The University of Iowa, Dr. Phillips is recognized by the National Association for Music Education as one of the nation’s most accomplished music educators (Teaching Music, October 2000). His choral book is cited for “raising the bar for choral music textbooks” (Choral Journal, May 2004), and the second edition has garnered the following praise: “This text is excellent. By using Directing the Choral Music Program, I am confident that I am giving my students a chance to succeed immediately in their teaching careers.”

Phillips is the recipient of the Robert M. McCowen Memorial Award for Outstanding Contribution to Choral Music, the highest honor given by the Iowa Choral Directors Association. He also holds the Distinguished Music Alumni Award from Kent State University, and serves as honorary board member of the Lowell Mason Foundation. More recently, Drs. Stanley and Lois Schleuter (Iowa music alumni) honored Dr. Phillips and the late Dr. Edwin E. Gordon by underwriting the cost, and dedicating in their names a music education office for TAs in the new Voxman School of Music (2016).  State the Schleuters: “We believe that Drs. Phillips and Gordon made significant contributions to the music education profession stemming from their years as professors at Iowa, and are especially deserving of this honor.”

Dr. Phillips has presented over 300 workshops on child and adolescent voice production throughout the United States, and in Australia, Canada, China, and New Zealand. He believes that singing is a learned behavior, a developmental sequence of psychomotor skills.  Music teachers throughout the world use his research-based, five-part vocal method of systematic voice instruction (body, breath, ear, voice, and song), to teach children and adolescents to sing with accuracy, beauty, and confidence.