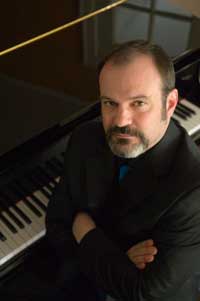 Praised for his “impeccable musicianship, exhilarating technique, and panache” (American Record Guide), pianist Alan Huckleberry is recognized as a multi-faceted artist on the classical music scene.  He has performed both in recitals and as a soloist with orchestras in Germany, England, Czech Republic, Italy, Austria, Spain, France, Costa Rica, Colombia, and across the United States.

Huckleberry is also in demand as a chamber musician, with recitals across the United States, Australia, and Europe. He can be heard on four compact disc recordings on the Crystal Record and Albany Record labels.

In addition to his performing career, Dr. Huckleberry is equally passionate about his role as an educator.  He is currently associate professor of piano pedagogy and collaborative arts at The University of Iowa. There he heads the piano pedagogy program, which is now recognized as one of the leading programs in the nation.  He is a sought-after speaker on pedagogical topics, including talks at the World Piano Pedagogy Conference, the National Conference on Keyboard Pedagogy, and the Music Teachers National Conference.  At The University of Iowa, he also maintains a studio of national and international students, who themselves are beginning to leave their mark in their field.  In fact, all DMA graduates from his piano pedagogy program are themselves now teaching at academic institutions across the country and abroad.

A native of Indiana, Huckleberry began serious studies at the piano in Germany with Polish pianist Barbara Szczepanska.  Further studies at the conservatories of Karlsruhe and Cologne with Japanese pedagogue Naoyuki Taneda and German pianist Josef A. Scherrer solidified a diverse and international musical background. He then returned to the United States to complete his studies with Arthur Greene at the University of Michigan.

Huckleberry’s repertoire not only includes the standard works of the piano literature, but he is an ardent supporter of new music and young composers, as seen by a long list of compositions which were written for him. Among the many 20th and 21st century styles he enjoys, he is particularly interested in contemporary rags and other crossover genres.

Dr. Huckleberry has recently embarked upon a massive video recording project.  Together with Dr. Jason Sifford, he is creating the largest known database of performances of piano pedagogical literature.  In the end, it will encompass some 7000 videos of beginning to intermediate repertoire.  The videos are available to all, free of charge, at YouTube (search: UIPIANOPED). 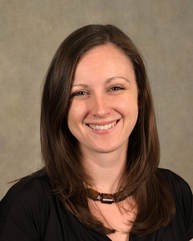 ​An Iowa native, Nicole Peter is currently pursuing her Master of Arts degree at the University of Iowa, where she studies piano with Dr. Ksenia Nosikova and piano pedagogy with Dr. Alan Huckleberry. Nicole received her Bachelor of Music degree in piano performance from Western Illinois University in 2010, where she studied with Dr. Chung-Ha Kim and Dr. Tammie Walker.

As a teaching assistant at the University of Iowa, her duties include teaching group piano classes, individual piano lessons, and accompanying. In addition, Nicole serves as coordinator of the University’s Pre-College Piano Conservatory, where she teaches a studio of talented young students. Before beginning her studies this fall, she gained extensive teaching experience through her work with the Nancy Cree Keyboard Learning Centers in Coralville, IA, where she taught for four years. During her undergraduate study, she was one of the founding teachers of the WIU Community Music School, which has since grown to offer a wide variety of lessons and classes to both children and adults in the Macomb community.

​Nicole is interested in the music of female composers, and enjoys performing and promoting their works. In 2010, she gave a lecture-recital at the ISMTA conference on Fanny Mendelssohn-Hensel’s Das Jahr; in 2012, she presented a lecture-recital on the harpsichord suites of Elisabeth Jacquet de la Guerre for the Iowa City Early Keyboard Society. 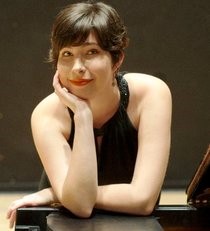 Originally from southern California, Natalie Landowski received a Bachelor of Music in piano performance (with minors in general education and art history) from the University of California, Irvine, studying under the tutelage of Dr. Lorna Griffitt. She earned a Master of Music in piano pedagogy from the University of Illinois at Urbana-Champaign (UIUC), where she studied piano pedagogy with Dr. Reid Alexander, and piano with Dr. William Heiles. At Illinois, Natalie was awarded the Graduate Teaching Certificate from the UIUC Center of Teaching Excellence, and was cited on the institution’s list of Teachers Ranked as Excellent (2011-12). She was an instructor for the UIUC Piano Laboratory program, and president of the MTNA Collegiate Student Chapter. Since 2011, Natalie has served on the piano faculty and staff of the Illinois Summer Youth Music Festival, and this past summer, also taught at the University of Iowa's Piano Youth Camp. In 2013, she joined the full-time piano faculty of West Music (Coralville, IA) in the Nancy Cree Keyboard Program, where she taught and maintained a full studio for four years. Her students have competed, placed and won at the IMTA district and state auditions.

Natalie has performed in master classes by notable artists such as Gary Graffman, Menahem Pressler, and Kenneth Drake, and presented both chamber and solo performances for the University of Iowa's Piano Sundays series at the Old Capitol Museum, the Upper Bay Philharmonic Society (CA), and Irvine City Hall (CA), as well as other venues. She has attended music festivals in Europe and the U.S., and placed as a finalist in the Schlern Piano Competition (Vols am Schlern, summer 2008 and 2015). Last Fall, Natalie presented her piano pedagogy workshop: Shining Light on Neglected Keyboard Masters François Couperin and Johann Nepomuk Hummel, in Illinois at the University of Illinois, Urbana-Champaign, and in California at the University of California, Irvine, San Diego State University, and Saddleback College. Most recently, Natalie has been collaborating with University of Iowa professor, musicologist, and author of The Elocutionists: Women, Music, and the Spoken Word (Univ. of Illinois Press, 2017), Dr. Marian Wilson Kimber, reviving the lost art form of elocution. In June, they were invited by the National League of American Pen Women (NLAPW) to perform at their 120th anniversary event in Washington, DC.

Natalie is currently pursuing a Doctor of Musical Arts in piano performance and pedagogy at the University of Iowa, where she studies piano with Dr. Ksenia Nosikova and piano pedagogy with Dr. Alan Huckleberry. 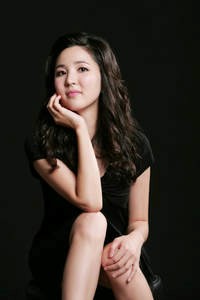 Born in Incheon, South Korea, Bogyeong Lee started playing piano at the age of six, and received professional piano lessons at the age of fourteen. Her musical talent soon blossomed when she was admitted to the Incheon Korean Educational Center for Gifted Children. Later on, she pursued her piano studies at the Incheon Arts High School and the College of Music of Dankook University, where she studied with professor Youngbang Cho. Miss Lee was proud to be admitted, and graduated as a top fellowship student, receiving magna cum laude from both institutions. She earned her Master of Music at the Jacobs School of Music at Indiana University, studying with Professor Emile Naoumoff. Currently, she is pursuing a Doctor of Musical Arts with Ksenia Nosikova at the University of Iowa School of Music, where she is a piano teaching assistant. Miss Lee achieved success in several competitions in Korea, including the 1st prize of the Carl Czerny National Music Competition (2010), Korean Herald Music Competition (2009), The classic music magazine “Edu-classic” Competition (2008), The Superintendent Youth Music Competition (2006), Seo-got Cultural Festival Competition (2006), and Central Music Daily competition (2006). Orchestral engagements include a performance of Mozart's Piano Concerto in C Minor, K. 491 with the Indiana University Students' Orchestra (2015), and Beethoven's Piano Concerto in C Minor with the Millennium Symphony in Korea (2005). Recital performance highlights include a solo  recital ‘variation series’ in E-won cultural center in Seoul, Korea where Miss Lee was chosen as Young Artist (2009).