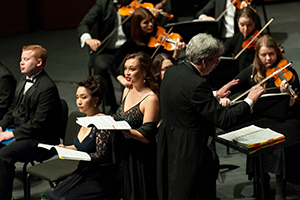 Refer to the required repertoire as stated below for M.A. and D.M.A. audition requirements.  All pieces must be sung from memory with piano accompaniment.  Announce each selection (title, composer) prior to your performance.

Attire should be concert or audition clothing. Please prepare and bring a Curriculum Vitae/Musical Resume and Repertoire List.

Pre-screening video links are due by January 1, and must be emailed to Professor Elise DesChamps.

There will be additional virtual informal interviews for the those who are considered for Teaching Assistantships in February.  The interviews will be scheduled individually.

The D.M.A. audition committee is comprised of all members of the UI voice faculty. A majority vote by the committee constitutes its decision. If disapproved, the audition may be repeated once at the discretion of the voice faculty.