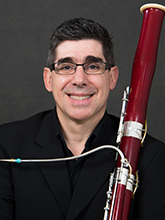 Benjamin Coelho, professor of bassoon, has been at the University of Iowa since 1998. He has appeared as soloist, chamber musician, orchestral musician, teacher and clinician in several countries including the United States, Brazil, Argentina, Bolivia, Panama, Portugal, France, Romania, Australia, Canada and Czech Republic.

An enthusiastic proponent of new music, Mr. Coelho has commissioned, performed and recorded many works by European, American and Latin American composers. His recordings include, Bassoon Images from the Americas (2003), released by Albany Records; Bravura Bassoon (2005), Pas de Trois (2006) released by Crystal Records; and Explorations (2007), Dreaming in Colours (2011) and Agnus Dei (2012) all released by MSR Classics. The specialized media has continuously praised his recordings "...Ben has such a gorgeous sound, such impeccable technique, and such sensitive musicality, that it is a real pleasure to recommend this album very strongly to all of you!" (Ronald Klimko, IDRS Journal), "Coelho's program is an international affair that shows the range of colors and character that the bassoon can explore in tandem with string colleagues. His playing is unfailingly sonorous, expressive and alert, and he champions the pieces on this recording as if he believed in them without reservation." (Donald Rosenberg, The Gramophone), "Coelho is fantastic. His sound is brilliant, resonant, and strong, and he has a warm tone that blends superbly with the strings." (Schwartz, American Record Guide). As a member of the group Wizards! A Double Reed Consort, Coelho has recorded two CDs released by Crystal and Boston Records in 2000 and 2003 respectively.

Before his position at the University of Iowa, Mr. Coelho was the vice-dean and bassoon professor at the Federal University of Minas Gerais (Brazil). He also worked extensively as a performer in his native Brazil, including principal positions with symphony orchestras in Rio de Janeiro, Campinas, and Belo Horizonte.

Ben lives in Iowa City, IA, with his wife Karen and their wonderful daughters Liliana and Julia.