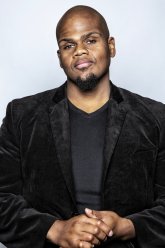 Curtis Taylor is an award-winning trumpeter, performer, composer, recording artist and educator.  He holds a Bachelor's & Master’s in Jazz Studies from Michigan State University and from Rutgers University respectively.

In 2014, Taylor relocated to southern California where he fostered a musical relationship with friend and mentor Kamau Kenyatta. Kenyatta, is a Grammy-Award winning producer for Jazz vocal-star Gregory Porter. While building the musical team for Porter’s “Liquid Spirit” album, he chose Taylor for the trumpet chair. Kenyatta stated that Taylor “graced the session with his elegant solos and precise ensemble playing” and noted his musicianship as “impeccable.” Gregory Porter’s “Liquid Spirit” would go on to receive the Grammy-Award for Best-Jazz vocal album of 2014. Since then, Kenyatta has continued to use Taylor on numerous projects that he has produced. Recent projects include: Kate’s Soulfood, Allan Harris (2021) A Woman’s Story, Paulette McWilliams (2020) and Kenyatta’s own project entitled: The Elegant Sadness (2019). Independent of producer Kamau Kenyatta other notable recent recording projects include; Tiny Room Sessions, Terreon Gully (2020); Still I Rise, Derrick Gardner & The Big Dig! Band (2020)

Alongside recording extensively as a sideman, Taylor has released two albums as a leader: #Hashtagged (2017) which features produced tracks with live instrumentation and vocals & Snapshot (2019) which was recorded live with his quartet at the World Stage in Los Angeles, CA. Taylor has also maintained an exciting performance career and a budding education career. As a performer, he has performed with his quartet across the US at many coveted venues & festivals. Recent notable performances include: Font Festival (2020), Detroit Jazz Festival (2020), LACMA (2021), Bechtler Museum of Modern Art (2021) and the Blue Llama Jazz Club (2021). As an educator, he taught for over five years as a guest lecturer at California State University, San Marcos, created a performance lecture series at libraries nationally and been a highly sought-after guest clinician/lecturer. Highlights include: Jazz 88’s Young Audience Program, University Of California, San Diego and the Chicago Jesuit Academy.

In the fall of 2021 Taylor became the newest addition to the University of Iowa’s Jazz department.  He currently teaches Jazz history, Jazz theory and directs the JRE Big Band with his appointment as lecturer.