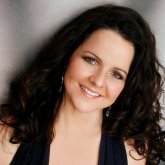 A native of Montréal, Canada, Mezzo-Soprano, Élise DesChamps, is praised for her dark, rich mezzo-soprano voice, and sensitive musicianship. Mrs. DesChamps is also a highly sought-after teacher and master clinician. From 2007-2019, she was a member of the voice faculty at Capital University in Columbus, Ohio, and from 2016-2019, she was a Graduate Teaching Assistant of The Ohio State University, where she won the Concerto Competition, and was granted The Margaret Speaks Vocal Scholarship and The Critical Difference for Women Scholarship.

Élise appeals to audiences and critics alike as a compelling and charming artist in opera, oratorio, and concert. She has been praised by Opera News for her “ability to handle coloratura effusions while bouncing with exhilaration about the stage,” her latest Carmen was described as “rich, powerful, sensuous; the audience who observed her actions and heard her dark, rich mezzo-soprano voice admired her vocal and dramatic skills,” and her debut with Opera Columbus was celebrated as “vocal brilliance and radiant beauty; the warmth of her voice and the fragrance of her beauty lend themselves to her sprite-like believability.”

DesChamps earned her Doctor of Musical Arts from The Ohio State University, where she studied with Dr. Scott McCoy. She received her Master of Music degree from Indiana University Jacobs School of Music, where she studied with Virginia Zeani and Costanza Cuccaro. Élise is an alumnus of the Conservatoire de musique et d’arts dramatiques du Québec à Montréal, where she completed Bachelor degrees in cello and musicology. Élise DesChamps is an active member of the National Association of Teachers of Singing, the Honor Society of Phi Kappa Phi, and the Golden Key International Honour Society.