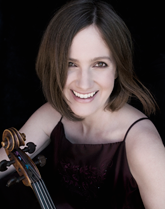 Elizabeth Oakes, violist, is an active chamber musician, teacher and performer and is currently the director of the University of Iowa String Quartet Residency Program at the University of Iowa. For twenty-two years, Ms. Oakes served as the violist of the Maia Quartet and as a member of the Quartet, she performed throughout the United States, Asia, Canada, and Europe and concertized in major venues including Alice Tully Hall, Merkin Hall, the 92nd Street Y and Washington DC’s Kennedy Center. Her collaborations with other artists included Maia Quartet performances with Daniel Avshalomov, Joel Krosnick, Helen Callus, Andre Michel Schuub and Robert Kapilow. Ms. Oakes has taught at numerous summer festivals including the Interlochen Advanced String Quartet Program, The Great Wall International Music Academy in Beijing, China and the Rocky Mountain Summer Conservatory in Steamboat Springs, Colorado.

Ms. Oakes programming and interdisciplinary interests have led her to coordinate and program many large-scale projects. With two other colleagues, Ms. Oakes founded and served as an artistic director for the Foothills Music Festival in Winston-Salem North Carolina for nine years. During her tenure at the University of Iowa, she has coordinated several large events, including Scandinavian/NordicFest – a month-long festival with chamber music at the heart of each event, included film, theater, dance, lectures, recital as well as a large outreach component. Ms. Oakes also teamed up with the UI Music Therapy department to present Music, Healthcare and Well-Being - programming focused on the relationship between music and health. She has been the recipient of numerous grants from major granting organizations such as Chamber Music America, the Iowa Arts Council, Humanities Iowa and the John and Anna Hanes Foundation.

Ms. Oakes is a graduate of Oberlin Conservatory where she received a Bachelor of Music degree in viola performance as a student of Jeffrey Irvine. She continued with a Master of Music degree from the Cleveland Institute of Music with Heidi Castleman and a Graduate Performance Diploma from the Peabody Conservatory of Music with Paul Coletti. At the Juilliard School, she served as a teaching assistant to Sam Rhodes of the Juilliard Quartet. As part of the Maia Quartet, she worked intensively with the Cavani Quartet, the Juilliard Quartet, the Tokyo Quartet and Earl Carlyss.