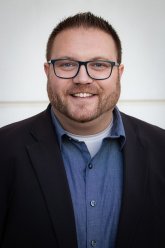 Eric W. Bush is Associate Director of Bands and Director of the Hawkeye Marching Band in the School of Music at the University of Iowa, where he also serves as Ensemble Area Head. He leads the athletic band program, conducts the Iowa Concert Band, and teaches various other courses, including marching band techniques and band arranging.

During Bush’s tenure as Director of the Hawkeye Marching Band, the ensemble has earned national recognition for innovative show design, dynamic collaborations, and exponential growth in engagement among students, alumni, and the Hawkeye community. He is proud to have designed noteworthy shows such as “Superheroes,” a 2018 collaboration with the University of Iowa Stead Family Children’s Hospital Kid Captain program; “HMBTV” (2019); and 2022’s celebration of the 120th anniversary of the birth of Meredith Willson, which featured 76 trombones on the field in Kinnick Stadium. In 2020, he designed and implemented an entire season of “Virtual Game Days” at the height of the COVID-19 pandemic. The Hawkeye Marching Band collaborated with The Ohio State University Marching Band in the 2022 season to perform a fully integrated halftime show celebrating the music and career of Sir Elton John, which gained national attention and recognition from Elton John himself.

From 2015 to 2018, Bush served as Assistant Director of Bands and Jazz Studies at The Pennsylvania State University. He was actively involved with all operations of the Marching Blue Band and volleyball, basketball, and hockey pep bands. Also a member of the conducting, jazz, and graduate faculties, Bush worked with concert bands, taught undergraduate conducting, coached jazz combos, and directed the Inner Dimensions jazz ensemble. In 2015, he served as Visiting Director of Bands at Cornell College in Mt. Vernon, IA, and from 2008 to 2012, he served as Director of Bands and assistant professor at Suffolk County Community College on Long Island, NY.

Originally from Michigan, Bush earned his bachelor’s degree in music education from Central Michigan University. He holds a master’s degree in trumpet performance from the University of Montana, where he served as graduate teaching assistant for bands. From 2012 to 2015, Bush served as a graduate teaching assistant at the University of Iowa, where he earned the Doctor of Musical Arts degree in Band Conducting and published his thesis, The History of the Big Ten Band Directors Association (1971-2015).

Bush is very active in the music community, as he guest-conducts, clinics, and adjudicates regularly, and he is frequently invited for guest speaking engagements. His professional affiliations include the College Band Directors National Association (CBDNA), National Band Association (NBA), Big Ten Band Directors Association (BTBDA), and the Iowa Bandmasters Association (IBA). Bush has served as faculty advisor to both the Penn State and University of Iowa collegiate chapters of the national music fraternity Phi Mu Alpha Sinfonia. In this capacity, he was honored with the coveted Orpheus Award. Dr. Bush lives in Iowa City with his wife, Alex, and their son, Brecken.