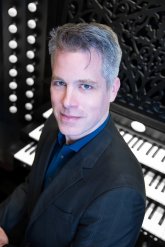 Gregory Hand is Associate Professor of Organ at the University of Iowa. Prior to this appointment he held the position of University Chapel Organist at Northwestern University, where he also taught in the Music Theory department. He was awarded the Doctorate of Musical Arts degree from the University of Michigan, where he studied organ with James Kibbie and harpsichord with Edward Parmentier.

Dr. Hand is in high demand as a performer and pedagogue. He has given recitals and masterclasses in the United States, France, Spain, Germany and Brazil, and served on the jury for national and international organ competitions, including the Internationale Orgelwoche Nürnberg (ION), the Mikael Tariverdiev Organ Competition and the Sursa National Organ Competition. His articles on organ literature and pedagogy have appeared in The American Organist Magazine, The Diapason, Organ - Journal für die Orgel, The Organ (U.K.), and Notes, the Quarterly Journal of the Music Library Association.

His debut CD, “The Complete Gospel Preludes of William Bolcom” on the Naxos label marked the world premiere recording of all twelve of these landmark pieces.  Critics praised the recording as “stunning” (American Record Guide) and noted the “sonorous and probing performances” (Gramophone), and the “brilliance of his technique” (allmusic.com).

He also was the first organist to play all twelve Gospel Preludes in one concert: first at the University of Michigan with the composer in attendance, and later at Princeton University, University of Glasgow, St Giles Cathedral (Edinburgh), and the Twin Cities (MN) chapter of the American Guild of Organists.

Dr. Hand has often collaborated with other instrumentalists to perform new music.  With bassoonist Benjamin Coelho he premiered Adrian Vernon Fish’s Kassoq at the International Double Reed Society Conference in Redlands, CA.  With Amy Schendel he premiered Patrick Schulz’s Fanfare for Trumpet and Organ, which was recorded for the MSR label.

He is also very active as a harpsichordist and continuo player. Past engagements include performing as harpsichord soloist for Bach’s Brandenburg Concerto no. 5 with the Des Moines Symphony, and providing continuo accompaniment for Vivaldi’s Four Seasons with the Des Moines Symphony and Anne Akiko Meyers, Giulio Cesare with the Lyric Opera of Chicago, and Ritorno d’Ulisse with Chicago Opera Theater. He also conducted from the harpsichord a concert performance of Jacopo Peri’s Euridice at the University of Iowa.