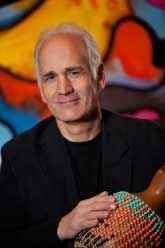 James Dreier is a drum set-Latin percussion specialist, educator, clinician, and performer. He holds a Bachelor of Music degree from Berklee College of Music (Boston, MA) and a Master of Arts degree in music theory from the University of Iowa. He has studied with such master drummers as, Michael Spiro, Horacio "El Negro" Hernandez, Jose Eladio Amat, Bobby Sanabria, Giovani Hildalgo, Daniel Alphonso, Pascoal Meirelles, Joe Hunt, and Alan Dawson.

Since hearing his first Santana record in 1968, Dreier has had a passion and strong interest in Latin music. His life-long road of discovery started in earnest at Berklee College of Music when he studied with NYC Latin percussionist Ritchie (Pablo) Laundrum. Later as a graduate student at the University of Iowa, he performed and traveled with Brazilian pianist Rafael Dos Santos, including a residency at the Conservatorio Pernambucano de Musica in Refice, Brazil. Since then Dreier has traveled numerous times to Cuba where he studied with the legendary Rumba group Los Muñequitos de Matanzas, master drummer Jesus Alphonso, Daniel Alphonso and others.

Mr. Dreier was a founding member of the Iowa based-Latin/jazz group Orquesta Alto Maiz. He now leads his own Latin jazz group Ritmocano. His album "Familia, A Latin Jazz Journey" with this group and others was released in the spring of 2014 on Realtown Records. The most recent recording from this group is "Iowa Friends/Cuban Music" released in 2019 that features the core Ritmocano group along with many Iowa-based jazz musicians and educators.

In October of 2015, Dreier published the book, “Latin Jazz Guide, A Path to Authentic Percussion and Ensemble Performance” (Hal Leonard) along with the companion website: www.latinjazzguide.com. On September 1st of 2021, Dreier published his second book, "Standard Tune Learning Sequence, A Musical Approach to Improvisation for Jazz Drummers" (KDP) along with the companion YouTube channel.

Dreier is an educational artist for Sabian Cymbals.