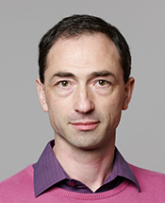 Jean-François Charles is a composer, clarinetist, and live electronics designer. After obtaining a MSc in Electrical Engineering at the National Institute for Applied Sciences in Lyon, he studied in Strasbourg with the Italian composer Ivan Fedele. As a clarinetist, he worked with Karlheinz Stockhausen for the world première and recording of Rechter Augenbrauentanz. He earned his Ph.D. in music/composition at Harvard, where he studied with Hans Tutschku, Chaya Czernowin, Julian Anderson, Helmut Lachenmann, Gunther Schuller, and others.

His article “A Tutorial on Spectral Sound Processing using Max/MSP and Jitter” published in the Computer Music Journal has helped many electronic musicians integrate spectral sound processing into live performances, compositions, or their own software creations. Since the summer of 2016, he has been responsible for the live electronic music program at the Composit music festival in Rieti, Italy.

He has collaborated with musicians for creations in the U.S.A., Canada, Europe, and China. After serving as deputy director at the Brest Conservatory (Bretagne, France), he joined in 2016 the School of Music at the University of Iowa as assistant professor in composition and digital arts. His research interests include the creation of new musical instruments at the crossroads of acoustics and electronics.