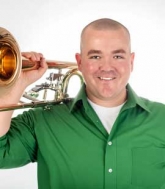 Allen began his professional career as a member of the Greeley Philharmonic Orchestra. As a member of the Orchestra at Temple Square (UT), he appears on weekly international television and radio broadcasts with the Mormon Tabernacle Choir, in addition to being heard on several audio and video recordings with the ensemble. He has performed with the Utah Symphony, Orchestra Iowa, Quad-City Symphony, Boulder Philharmonic, Cheyenne Symphony, and Ft. Collins Symphony. In addition, he can be heard on several film soundtracks and commercial recordings. He has performed at the International Trombone Festival, the Eastern Trombone Workshop, and the Southeast Trombone Symposium as a member of the Professor’s Choir.

Under his baton, the University of Iowa Trombone Choir performed at the 2013 International Trombone Festival in Columbus, Georgia. His students have received scholarships and graduate assistantships to attend many of the top music schools in the United States, including the New England Conservatory, Eastman School of Music, University of Miami, Mannes College, Indiana University, and Western Michigan. Students have won positions in prestigious ensembles, such as the Grammy All-Star Band, Next-Generation Jazz Orchestra, Brubeck Jazz Colony, and Jazz Band of America.