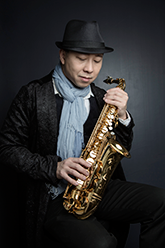 Widely recognized as one of the world’s leading classical saxophonists, Kenneth Tse is certainly one of the instrument’s outstanding proponents on any saxophone aficionado’s short list. He burst on the scene in 1996 as the winner of the prestigious New York Artists International Award, which resulted in an acclaimed debut recital at Carnegie Hall, after which he was hailed as “a young virtuoso” by the New York Times. The Alex Award from the National Alliance for Excellence led to another Carnegie Hall performance. These are but two of the multitude of awards that Tse has garnered in less than a decade and a half. Since then he has been a frequent soloist on five continents, including solo appearances with the Des Moines Symphony, United States Navy Band, Slovenia Army Band, La Armónica Band of Bunol, Spain, Thailand Philharmonic Orchestra, Strasbourg Philharmonic Orchestra, and Hong Kong Sinfonietta among others. He is frequent featured soloist at events such as the triennial World Saxophone Congress and North American Saxophone Alliance conferences. He has also been a guest clinician at conferences hosted by the California Band Directors’ Association, Iowa Bandmaster’s Association, and the Midwest International Band and Orchestra Clinics. Prestigious universities and conservatories worldwide, such as Sydney Conservatory, Moscow Conservatory and Paris Conservatory have invited him to give master classes.  He was recently a judge, representing the USA, at the 6th Adolphe Sax International Competition in Dinant, Belgium.

Tse has been an active recording artist since his first CD for Crystal Records at age 23. His discography now includes a total of twenty-three CDs—presenting a wide variety of saxophone repertoire, most of it new, some with assisting artists—on Crystal Records, RIAX records, Jeanné records, Enharmonic records, Arizona University Recordings and MSR Classics. Critical review of these disks have yielded such comments from Fanfare Magazine as “Hong Kong-born Kenneth Tse is of the caliber of instrumentalists whose very sound is captivating,” and in American Record Guide, “supremely elegant tone…sheer virtuosity.” Saxophone Journal opined, “Kenneth Tse is a phenomenal saxophonist with incredible technical and interpretive skills. His tone is absolutely lovely. His fingers are precise and rapid. His interpretive skills are excellent having the ability to create vast aural fantasies in the listeners’ musical soul. The true magic of music is to take a series of ink blots on a piece of paper and turn them into temporal living entities that almost live and breathe. And…Kenneth Tse is the ‘master magician’.” International Record Review also acclaimed, “creamy sound and infallible technique.  Tse’s virtuosity holds us in awe.”

As an advocate for new music, Tse has had over thirty works dedicated to him and more in progress by many notable American composers as well as international composers in Hong Kong, Colombia, Costa Rica, France, Russia, Spain, Canada, Australia, and Belgium. Tse has recorded and premiered many of these concertos, sonatas, solo works and chamber pieces. His own arrangements for the saxophone are published by Reed Music, Australia, and his articles and interviews have been featured in the Saxophone Journal, The Instrumentalist, Fanfare Magazine, Saxophone Symposium, Iowa Bandmaster Association Journal, Japan’s Piper and The Sax Magazines, and Yamaha Education Series. Desiring to give back to his home city, Hong Kong, Tse has also founded in 2009 the biennial Hong Kong International Saxophone Symposium, which connects saxophonists from Asia and Oceania with world-class saxophone performers and teachers in a week-long event.

Tse's students have garnered high recognition through competitions and recordings as well as concert appearances.  During the 2010 North American Saxophone Alliance National Competitions, Tse's students from University of Iowa won three of the top four awards in the conference's classical competitions (in both solo and chamber music categories), a first in the history of the conference.  Recent highlights include: Gold medal at the 2020 Fischoff Chamber Music Competition, first prize at the 2019 Plowman Chamber Music Competition first prize, first prize at the 2019 Encuentro Universitario Internacional De Saxofón México Competition, first and third prizes at the Vandoren National Young Artist Competition, among others.

Tse is currently Professor of Saxophone at the University of Iowa in the United States.  He is the first saxophonist ever to have been elected to the presidency in both North American Saxophone Alliance and the International Saxophone Committee concurrently. For more media clips and information, please visit: www.kenneth-tse.com