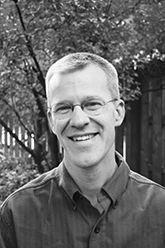 Nathan Platte teaches courses on film music and other 20th- and 21st-century topics for the School of Music and Department of Cinematic Arts. Platte’s publications explore the sound of Hollywood’s studio era from a variety of angles, including the collaborative process of film scoring, the intersection of technology and music, the role of studio orchestras, and soundtrack albums. This work has taken him to film and music-related archives around the country, and he has contributed to conferences on film sound and archival research at the British Library and the University of Huddersfield.

His articles have appeared in The Journal of Musicology, Music & Politics, 19th-Century Music, and The Journal of the Society for American Music, Music and the Moving Image, and The Journal of Film Music. Platte’s work has also been published in many anthologies, including The Oxford Handbook of the Hollywood Musical (2022), where he contributed an essay on actor and pianist Oscar Levant, and The Cambridge Companion to Gershwin (2019), where he wrote an article on Shall We Dance and A Damsel in Distress.

Platte’s books include The Routledge Film Music Sourcebook (Routledge, 2012; coedited with James Wierzbicki and Colin Roust) and Franz Waxman’s “Rebecca”: A Film Score Guide (Scarecrow Press, 2012; coauthored with David Neumeyer). His most recent book, Making Music in Selznick’s Hollywood (Oxford University Press, 2018), investigates the scores for films like Gone With the Wind, Since You Went Away, and Spellbound.

Since 2020, Platte has worked as a writer, producer, and co-host for two podcasts: Sounding Cinema, a film music podcast made in collaboration with students, and FilmCastPodScene, a podcast cohosted with Ben Delgado, the programming director of Iowa City’s independent cinema, FilmScene.

Platte received his Ph.D. from the University of Michigan, where he also completed bachelor’s degrees in history and trombone performance. Before joining the faculty at the University of Iowa in 2011, he taught at Michigan and Bowling Green State University. He served as President for the Midwest chapter of the American Musicological Society from 2020 to 2022.

Courses taught by Professor Platte include: