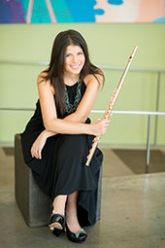 In addition to her teaching position at the University of Iowa, Professor Esposito has served on the faculties of the Interlochen Arts Camp, the University of Wisconsin-Platteville and held a guest teaching residency at the University of Michigan.  She has given numerous master classes at prestigious universities and conservatories in the United States and abroad including the Geneva Conservatory, Royal Danish Academy, Madrid Royal Conservatory, Mannheim Hochshule, Milan Civic Music School and many others. As an orchestral musician, Esposito has performed under some of the worlds leading conductors, including James Conlon, David Zinman, Gunther Schuller, and Robert Spano. Former principal flute with the Dubuque Symphony Orchestra, she has also performed with the Quad City Symphony, Cedar Rapids Symphony, Waterloo-Cedar Falls Symphony, Youngstown (OH) Symphony, and the Johnstown and Westmoreland (PA) Symphony Orchestras. Esposito has held the Piccolo Fellowship at the Aspen Music Festival and has also been Principal Flute of the Ohio Light Opera. She has participated in a number of other music festivals including the Brevard Music Center, The Youth Orchestra of the Americas, and the National Orchestral Institute.

Professor Esposito holds degrees from Carnegie Mellon University and the University of Michigan. She has been a finalist or prizewinner in several prestigious competitions including the National Flute Association’s Young Artist, Piccolo Artist, and Orchestral Competitions, the WAMSO Competition sponsored by the Minnesota Orchestra, and the Houston Symphony Ima Hogg Competition.  Additionally she has published articles on Banddirector.com, The Flutist Quarterly, Flute Focus and Flute Talk Magazines and can be heard on the Albany Records, MSR Classics and Con Brio Recordings labels. Her primary flute teachers include Jeanne Baxtresser, Amy Porter, Marianne Gedigian, Jennifer Steele, and Catherine Payne, with additional study with Mark Sparks, Alberto Almarza, and Doriot Anthony Dwyer. Nicole Esposito performs on the 14k Miyazawa flute and the Hammig Piccolo, Mancke Headjoints and is an endorser of the LefreQue sound bridges for wind instruments.