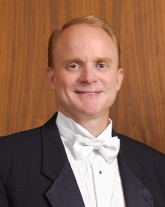 Richard Mark Heidel is Director of Bands and Professor of Music in the School of Music at the University of Iowa where he conducts the Iowa Symphony Band, teaches graduate courses in conducting and band literature, guides the graduate band conducting program, and oversees all aspects of the University of Iowa band program. Ensembles under Dr. Heidel’s direction have performed at national, regional, and state conferences including those of the College Band Directors National Association, Music Educators National Conference, Iowa Bandmasters Association, Wisconsin Music Educators Association, Illinois Music Educators Association, and National Band Association-Wisconsin Chapter. He has also led concert tours to the Republic of Ireland and United Kingdom as well as throughout the Midwest.

Dr. Heidel has been distinguished with memberships in numerous national and international honor societies and fraternities including Phi Mu Alpha Sinfonia, Pi Kappa Lambda, Kappa Kappa Psi, Phi Eta Sigma, Phi Kappa Phi, Kappa Delta Pi, Pi Nu Epsilon, and Golden Key. He was the recipient of the Outstanding Musician award at Texas Tech University in both 1985 and 1986, and in 1997, he received the A. A. Harding award at the University of Illinois for the "highest possible achievement, service, and devotion to the University Bands." In 2002, Dr. Heidel was named to the "Who's Who Among America's Teachers," and in 2003 and 2010 he received the Citation of Excellence from the Wisconsin Chapter of the National Band Association. In 2005, he was initiated into Sigma Alpha Iota as a National Arts Associate, and in 2008, he was elected to membership into the prestigious American Bandmasters Association. Dr. Heidel received the Collegiate Teaching Award from the UI College of Liberal Arts and Sciences in 2012, and a Citation of Excellence from the National Band Association in 2016.

Dr. Heidel has presented clinics and workshops at state music conferences and universities in Florida, Georgia, Illinois, Iowa, Michigan, Minnesota, Missouri, New Mexico, Ohio, Pennsylvania, South Dakota, West Virginia, Wisconsin, and Wyoming, and he has appeared as guest conductor and clinician in more than 30 states, Washington, D.C., and the Canadian provinces of Ontario and Manitoba. In 2003, Heidel served as an adjudicator for the Limerick International Marching Band Competition and the 100th St. Patrick’s Day Festival in Dublin, Ireland. Dr. Heidel was the conductor of the Asia Pacific Activities Conference APAC Band in Hanoi, Vietnam in 2016, and conductor of the Association of Music in International Schools High School Honor Band in Salzburg, Austria in 2019. Heidel has two commercial compact disc recordings to his credit including TRADITION featuring live performances of the Iowa Symphony Band released by Equilibrium in 2017, and Martyrs for the Faith featuring Kenneth Tse, saxophone with the Iowa Symphony Band released by MSR Classics in 2012.

Dr. Heidel currently serves on the Board of Directors of the National Band Association and American Bandmasters Association, and is the State of Iowa Representative for the College Band Directors National Association as well as Past President of the Big Ten Band Directors Association. His list of more than 30 publications includes articles in the National Band Association Journal, Teaching Music, Teaching Music Through Performance in Band, and Iowa Music Educator. Dr. Heidel is Director of the Iowa Summer Music Camps, and he has taught for summer programs at the Shell Lake Arts Center (WI), Texas Tech University Band and Orchestra Camp, Illinois Summer Youth Music Program, and the International Music Camp. Heidel, an active trumpet player, frequently performs with orchestras and big bands in Iowa.