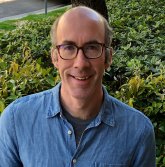 Sam Young is a composer, percussionist, and educator. His work explores the soundscapes of both natural and urban environments, and ranges from music for wind ensemble and chamber groups, to experimental electronic music and synth pop. He has been a featured composer at festivals such as the Fairbanks Summer Arts Festival, California Summer Music, and the International Summer Academy of Music in Germany, and his music has been performed by artists such as Jose Menor, Wild Up, and the Adelaide Wind Ensemble. An avid collaborator, Sam often works across disciplines with choreographers and filmmakers to create compelling multimedia experiences. In a recent piece, he combined environmental sounds and synthesis to create an electronic score for Los Angeles choreographer Marianna Varviani’s performance piece Phoenix: Rising from the Ashes, which was staged at UCLA in 2020.

Before he began composing, Sam enjoyed a career as a professional drummer, performing and recording with national touring bands Devotchka and the Samples. Drawing on this experience, he often creates music that is rhythmically driven and spacious in texture, finding intersections between popular music and classical performance traditions. As a music theorist, his research interests include hypermeter and phrase structure, musical characteristics of speech and regional accents, and music theory pedagogy.