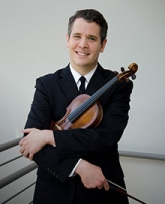 Commended by The Strad for “brilliance of tone and charismatic delivery,” Scott Conklin regularly appears as a recitalist, soloist, chamber musician, orchestral player, and teaching clinician throughout the United States and abroad. He is associate professor of violin at the University of Iowa School of Music and a violin teacher at the Preucil School of Music. Conklin has performed as a soloist with numerous orchestras, including the Louisville, Nashville, and Berlin Symphony Orchestras. He is a recipient of the Iowa String Teachers Association Leopold LaFosse Studio Teacher of the Year Award and has been a featured artist/clinician at the conferences of the Music Teachers National Association and the Suzuki Association of the Americas. Conklin has also been a presenter at the American String Teachers Association Conference.

As an active recording artist, Conklin frequently collaborates on a variety of recording projects. In 2019, Conklin is featured on the album Ich Denke Dein: Songs & Chamber Works By Nikolai Medtner (Albany Records) with soprano Rachel Joselson and pianist Sasha Burdin as well as oboist Courtney Miller’s album Portuguese Perspectives: Music for Oboe, Piano, and Strings (MSR Classics), featuring a four-movement Quintet for Oboe and String Quartet by Sergio Azevedo. Conklin will soon release an album of Hans Gál’s music with violist Christine Rutledge, oboist Courtney Miller, and composer/pianist David Gompper.This ensemble recently performed two concerts of Hans Gál’s music at the Edinburgh Festival Fringe on a tour of Scotland. Conklin performed Carlo Taube’s music in a 2016 album Songs of the Holocaust on Albany Records with soprano Rachel Joselson and pianist Réne Lecuona. American Record Guide said the album was “sure to please any fan of violin and piano who is looking for something new.” Conklin’s recording of A Tempered Wish for Solo Violin and Chamber Orchestra by Ching-chu Hu was released on the album Vive Concertante! He has also recorded works by Luke Dahn, Franco Donatoni, D. Martin Jenni, and Jeremy Dale Roberts. Conklin and Huckleberry performed on the Suzuki Association of the Americas album Celebrating Excellence 2009, which featured the Albers Trio, Cavani String Quartet, Rachel Barton Pine, and Orion Weiss among others. A devoted supporter of music education, Conklin was featured on the violin masterclass DVD, Sound Innovations for String Orchestra, directed by Bob Phillips, Peter Boonschaft and Robert Sheldon. As an orchestral musician, Conklin performed on the Chandos release Prokofiev: War and Peace with conductor Richard Hickox, the Spoleto Festival Orchestra (Italia), and the Russian State Symphonic Cappella—an album listed in The Penguin Guide 1000 Greatest Classical Recordings.

In addition to performing from the heart of the standard repertoire, Conklin is a champion of new music.  Ching-chu Hu wrote and dedicated The Hope Moment (2011) to Conklin along with Hu’s Violin Concerto No. 3: Water Spirit, which was premiered in 2015. Composer Joel Puckett wrote and dedicated the BMI award-winning composition Colloquial Threads for Violin and Piano (2003) to Conklin as well as “Infinite Morning” for Violin and Piano (2015) and a four-movement violin concerto called Southern Comforts for Solo Violin, Orchestral Winds, Bass, Piano, and Percussion (2008).
​
Conklin holds the honorary distinction of being a “Kentucky Colonel,” a title given to him by Governor Wallace G. Wilkinson. He is a former faculty member of the University of Texas at Arlington, and he also taught on several occasions as a substitute violin professor at the University of Texas Butler School of Music. During his youth, Conklin was a student of Carol Dallinger, Violin Professor at the University of Evansville. He holds a Bachelor of Music degree from the Cleveland Institute of Music where he studied chamber music with the Cavani String Quartet, Anne Epperson, and Peter Salaff, and was a violin student of David Updegraff. Conklin also earned Master of Music and Doctor of Musical Arts degrees in Violin Performance from The University of Michigan School of Music where he was a teaching assistant under string music educator Robert Culver; there he studied chamber music primarily with Andrew Jennings, Paul Kantor, and Martin Katz, and was a violin student of Paul Kantor.