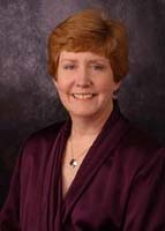 The career of soprano Susan Sondrol Jones illustrates the scope of her talents and the diversity of her interests. In the world of performance, she has appeared in opera and oratorio throughout the Upper Midwest, and has been a member of the renowned Dale Warland Singers and the Bach Society of Minnesota. As a recitalist, she has championed her love of music for solo voice and a variety of instrumental combinations. Jones earned her B.M., M.A., and M.F.A Degrees at the University of lowa, where she is now Adjunct Professor of Voice and Vocal/Opera/Choral Program Coordinator.

Opera roles include Corisande in the early opera Amadis (Lully), Philomele in the premiere of a new English translation of Le Roi I'a dit (Delibes), Euridice in the fanciful Offenbach operetta Orpheus in the Underworld, contemporary works such as Hans Werner Henze's Das Wundertheater (Chirinos) and Mme. Euterpova in Help! Help! The Globolinks (Menotti), as well as the familiar characters, such as all three major female roles - Countess Almaviva, Susanna, and the pageboy Cheribino in different productions of Mozart's Marriage of Figaro.

A great deal of her career has focused upon the teaching of singing, beginning at the University of Wisconsin-Madison Summer Music Clinic, extending to faculty appointments at the UW-Parkside, and MacPhail Center for the Arts/University of Minnesota, where Susan Sondrol Jones served as Chairman of the Voice Department. There she also initiated a series of Artist Master Classes which has served as the model for similar programs throughout the country. Her involvement with professional organizations includes serving for two terms as North Central Regional Governor and four years as Minnesota State Governor for the National Association of Teachers of Singing.

Along with 25 years experience in vocal performance and teaching, Susan Sondrol Jones has held several key administrative positions, including General Manager of the Minneapolis Chamber Symphony and Executive Director of Minnesota Chorale, where she facilitated a major recording of Haydn's Seasons in collaboration with The Saint Paul Chamber Orchestra, as well as implementing concert appearances at the Aspen Music Festival and in Mexico with the Mexico City Symphony.