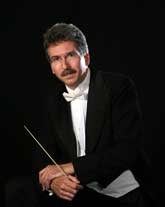 Dr. Stalter is particularly interested in researching issues relating to the teaching of conducting to undergraduate and graduate students, contemporary British choral music, and historical musical performance. He is a frequent guest clinician in the United States and is an active member with the American Choral Directors Association.

In addition to conducting and teaching choral music, Dr. Stalter is active as a tenor soloist in the United States and abroad, specializing in music of the Renaissance, Baroque and Classical periods. He is widely known for his performances as the Evangelist in the Passions of J.S. Bach and Heinrich Schütz. Among his credits are appearances as tenor soloist with the Newfoundland Symphony Orchestra, the North Carolina Symphony, the Robert Shaw Festival Singers in France, the Robert Shaw Chamber Choir in Atlanta, the Classical Music Seminar and Festival in Eisenstadt, Austria, and the Shenandoah Valley Bach Festival. He has also served as the tenor soloist in Haydn’s Creation for the International Cathedral Music Festival in Oxford and London, England and as the Evangelist in J.S. Bach’s St. John Passion at St. Patrick’s Cathedral in Dublin. Dr. Stalter has also recorded as soloist with Robert Shaw on two compact discs (Amazing Grace and Songs of Angels) released on the Telarc label and with Albany Records (Monsterology) as a conductor and soloist of contemporary music.