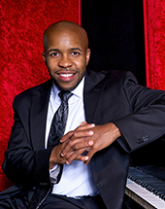 Dr. William Menefield, an active performer and composer, is assistant professor of jazz studies. His eclectic sound of jazz, R&B, soul, and classical, draws the audience in with each note, in every song, at all performances. The Cincinnati native flawlessly and creatively blends the influences of Stevie Wonder with Beethoven and Kenny Kirkland with Bach. He is seen as "a leader whose playing is nothing short of breathtaking" (CityBeat). His distinctive style creates a sound that is uniquely robust and smooth.

William began his professional jazz piano career at age twelve and released his first album, Big Will Leaps In (1999) with J-Curve Records, right out of high school. On this debut album, his "original pieces stand out...because they are intelligently crafted and flow with...lyricism..."  (JazzTimes). His second album, Will’s Revenge, was self-produced and released in 2005. In 2002, he was honored to serve as the Artist-in-Residence for The Robert S. Duncanson Society at the Taft Museum of Art. He has also been a soloist with the Cincinnati Symphony Orchestra (2005) and the Cincinnati Opera’s "Opera Goes to Church" (2006, 2013, 2016).

Dr. Menefield has shared the stage with Roy Ayers, Clark Terry, David “Fathead” Newman, Gary Bartz, John Blake, Don Braden, Steve Wilson, Javon Jackson, and a host of other outstanding musicians. In 2018, he served as musical director for Jennifer Holliday and participated on the creative team that produced music for the pilot episode of the HBO television series The Watchmen. He continues to perform at venues across the United States and the world, most recently performing in Namibia and Guatemala. He also traveled as a performer/presenter on the university tour, 400: An Afrikan Epic, with the Mark Lomax Quartet (2019-2020).

Dr. Menefield is currently working on commissions for the Cincinnati Opera, including the new opera, Fierce, with librettist Sheila Williams and dramaturg D. Lynn Meyer (set to debut in the summer of 2021). In 2020, he was also commissioned by Dr. Victoria Holland, lyric soprano and vocal coach at The Royal Conservatory of Music in Toronto, to compose the five-part song cycle, Here. In the spring of 2019, he had his Carnegie Hall debut with the performance of his choral-orchestral work Prism, commissioned by the Young Professionals Choral Collective. His children's choir piece, My Melody, commissioned by The Society for the Preservation of Music Hall, was performed at the 125th anniversary celebration of Cincinnati Music Hall in 2003.

William's commitment to his craft is apparent in his expertly executed and engaging performance and teaching style. He is dedicated to both educating and mentoring young musicians. Dr. Menefield is motivated by sharing the power of music.