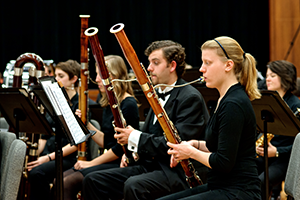 **All auditions for Fall 2021 admission will be conducted virtually**

Completing the application by the application deadline will enhance the possibility of being admitted for the following fall semester; later applications will be considered if openings remain. Although an audition on campus is recommended, a recording, representative of current performing abilities, may be submitted. The audition should include representative works from the advanced solo literature.

Graduate applicants should submit video auditions containing 15-30 minutes of music. Submission may be one video or several. It is not possible to edit audition links after uploading. Submission links will be submitted through the Music Supplemental Application.

Works not on these lists may be used for an audition with advance approval per the bassoon faculty.